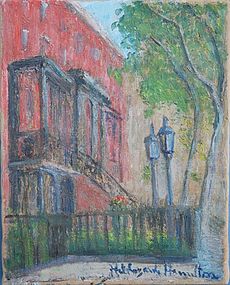 14" x 11" oil on canvas, signed lower right. Depicts 4 Gramercy Park, NYC. Based on bio, therefore, circa 1930. Priced unframed. Bio from Askart.com: From 1921 to 1926 Hildegarde returned to Europe to study at the Academie Julian, Academi Colarossi, Ecole des Beaux Arts, and the Academie de la Grand Chaumiere, all in Paris. Other schools were the L'Ecole des Beaux-Arts, Toulouse; Acadamia de Bellas Artes, Sevilla, Spain; and Harvey and Proctor School of Modern Landscape Painting, Newlyn, Cornwall, England. She returned to the U.S. and studied briefly at John Herron Art Institute, Indianapolis, Indiana; Cincinnati Art Academy, Cincinnati, Ohio and under Anthony Thieme, Rockport, Massachusetts. Upon her return from Europe, Hildegarde made her debut in New York at Ainslie Galleries, 677 Fifth Ave. with a one-man show. She exhibited 33 French Alpine scenes. She met with much success and sold quite a few pieces. This same year she went on to have many more exhibits in New York at various galeries, hotels, libraries and at the University Settlement. In 1928, Hildegarde had a one man show at the Women's National Party Headquarters on First Street. Vice President Charles Gates Dawes (an old friend of the family) gave Hildegarde much encouragement and purchased one of her paintings. In 1929 Hildegarde was the First American Woman to exhibit at Philip Dillon's Club: "L'Artistique" at Provence. She also exhibited at the Fortieth Salon of the Societe des Artistes Independants in Paris, the Galerie Alban, Monte Carlo and the Society of Modern Artists, Paris. In this year, Hildegarde gave birth to her first child: Meldagonde in Marseille, France. In 1930 Hildegarde exhibited mostly in Washington D.C. at the Carlton Hotel through the Art Promoters Club of which she was a member, however, she also had exhibits in New York at the Grand Central Palace, American - Anderson Galleries on 30 East, 57th St. and the Huntington Bay and Yacht Clubs. Around January - February 1931, Hildegarde met Rudyard Kipling in her travels. Later he wrote to her on April 25 from Aix-en-Provence -praising her paintings. Kipling also acquired one of Hildegarde's paintings later which was a study of a fountain in Aix-en-Provence. (See Public and Private Collections). From 1943 on Hildegarde resumed painting and exhibiting - mostly one-man shows in New York. In 1946 she started spending her summers in Nassau and would continue doing this for the remainder of her life. Her work would lead her from Nassau to Abaco, Eleuthera, Spanish Wells, Exuma, Grand Bahama and other outer islands. In 1949 she had her 1st one-man show in Nassau. In 1954 during her summers in Nassau, Hildegarde would exhibit at The Lucerne Hotel every Wednesday and Saturday afternoon. Firsts for Hildegarde: Believed to be the first Woman permitted to use her palette and canvas to paint the slaves inside the "Holy of Holies" - a Turkish Harem in Instanbul. Also, she was granted permission to paint in a Mohammedan Harem in Tangier. First woman to study at the Academia de Bellas Artes, Sevilla, Spain. First woman allowed to paint in the Royal Gardens at Seville. Public and Private Collections (a Partial listing) Eaton Gallery, New York City Hall of Art, New York City Virginia Military Institute, Lexington, Virginia Vice President Charles Gates Dawes The Allen Collection, Florida Sir Bede Clifford, Governor of the Bahamas Governor and Lady Grey, Nassau, Bahamas Sir Robert Neville, Governor ot the Bahamas Indian Students Club, Darwin's House, London American Church of Paris Societe des Beaux Arts, Paris
Similar Items from this seller