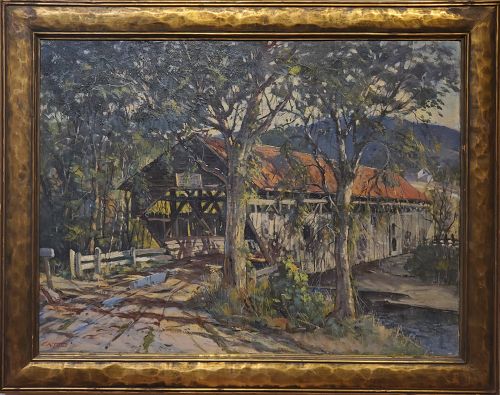 Landscape Painting of a Covered Bridge signed by Earl A. Titus ca 1937

Guest Book
$2,450.00
Landscape Painting of a Covered Bridge signed by Earl A. Titus dated 1937. Signed lower left and identified verso with date of 1937. This landscape of a covered bridge in the woods is oil on canvas laid to panel and measures 24 inches tall by 32 inches wide. Framed it measures 29 inches tall by 37 inches wide. A native of Woodsville, New Hampshire, Earle A. Titus was born on October 12, 1895, the son of Frank E. Titus and Nellie (King) Titus. After graduating from public schools in his hometown, he went to Boston, and studied at the New School of Design with John Douglas Connah and Vesper George, planning to enter the field of illustration. He subsequently did illustrations for the Saturday Evening Post, the Boston Post Magazine, and other periodicals. He also worked as a commercial artist. During WWI, Titus served as a second lieutenant in the Army at Ft. Lee, Virginia. For 40 years, he worked for Filene and Sons, mostly as a night superintendent, leaving daytime for his painting and hobbies like music, golf, and gardening. An accomplished flutist, he played with the Reading Symphony Orchestra, for many years. He was also and avid gardener, golfing enthusiast and Latin scholar and astronomer. Titus and his friends Aldro T. Hibbard of Rockport, MA, and Lee W. Court of Canton, MA traveled through New England together, painting at Jamaica, Vermont, and other Vermont and northern New England locations, as well as at Monhegan Island in Maine. He was a member of the Copley School of Art Society of Boston, and recently elected President of the Wakefield Art Association, before his sudden death of a heart attack in his home in Wakefield. His work is present in many private and corporate collections, and was widely exhibited locally in Massachusetts. Titus was married, with two children and the grandfather of five at the time of his death. Source: Obituary Wakefield Daily Item, Wakefield, Massachusetts, Monday January 22, 1962.
Similar Items from this seller