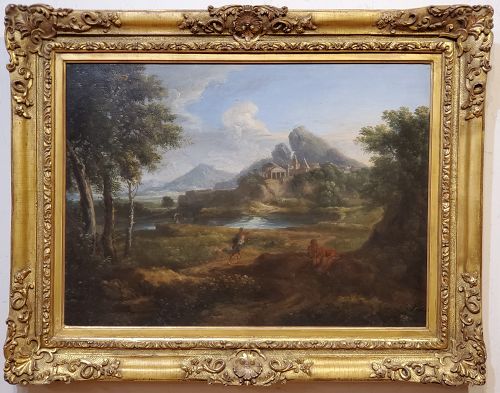 17th Century Oil Painting of a Roman Landscape Attributed to Gaspard Dughet Roman landscape with classical figures Attributed to the Italian artist Gaspard Dughet who lived between 1615 and 1675. Oil painting on canvas approximately 18" x 25". The painting measures 25" x 32" in the expensive custom gilt frame. The attribution to Dughet is reasonable. Gaspard Dughet (15 June 1615 – 27 May 1675), also known as Gaspard Poussin, was a French painter born in Rome. Dughet was born in Rome, the son of a French pastry-cook and his Italian wife. He has always generally been considered as a French painter, although in fact he never visited France. In around 1635 he became a pupil of Nicolas Poussin, who had married his sister Anne five years earlier. Because of this connection he was widely known as "Gaspard Poussin". He specialised in painting landscapes of the Roman Campagna becoming, along with his exact contemporary Salvator Rosa, one of the two leading landscape painters of his time. He painted several cycles of frescoes, including one, showing various sites around Rome, at the Colonna Palace. He worked with Pier Francesco Mola, Cozza, and Mattia Preti at the Palazzo Pamphilj in Valmontone. He often collaborated with Guillaume Courtois who painted the staffage in his landscapes. This was the case, for instance, in the works for the Palazzo Pamphilj. There is another fresco cycle by Dughet, though in a bad state of preservation, in San Martino ai Monti. During the 18th century Dughet's work became especially popular amongst British collectors, to such an extent that his name became attached to almost any classical landscape, and his style proved influential on British landscape painting and garden design. His Sacrifice of Abraham, once the property of the Colonna, is now, with other of his works, in the National Gallery, London. Dughet died in Rome on 27 May 1675.
Similar Items from this seller