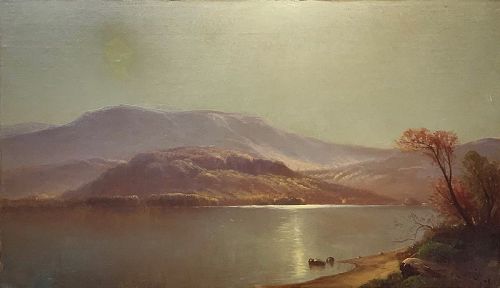 Bright luminist landscape signed by Carleton Wiggins, American 1848-1932 14" x 24" Oil on canvas signed and with partially abraded signature. John Carleton Wiggins was a pastoral landscape painter usually depicted with flocks of sheep or herds of cattle. His birth name was John Carleton Wiggins, but he preferred not to use his first name of John. He was born in Turner, Orange County, New York 1848 and raised in Brooklyn where he attended public schools and studied with George Inness. Some biographies indicate he studied at the National Academy of Design, but the Academy has no record of his attendance. However, their records do indicate that between 1866 to 1880, he exhibited at the Academy's annual exhibitions. In 1890, he was elected as an Associate member of the National Academy, and made an Academician in 1906. Beginning 1880, Wiggins spent several years painting and studying in Europe and England, but was primarily in France, developing plein-air painting skills at Barbizon and Fontainebleau. These years influenced his subsequent style and subject matter as he changed from pure landscape painting to landscapes with "broadly brushed images of cattle and sheep". (Davis, 584). He won a gold medal at the Paris Salon in 1894, and exhibited regularly at London's Royal Academy. He also studied in Holland. Returning to New York, he maintained a studio in Greenwich Village, and was influenced by John H. Cocks, a Brooklyn sculptor and landscape painter. By 1904, Wiggins moved his primary residence to Old Lyme, Connecticut, which had been the place he and his family had spent their summers. There he became a founder of the Old Lyme Art Colony, which grew to be a center of American Impressionism. Many of his paintings, with subtle lights and shadows, warm colors and soft edges, reflected his inspiration of the countryside of Old Lyme. It was a natural setting for artists, whose work like that of Wiggins, made obvious the influence of the French Barbizon painters. Carleton Wiggins also founded an art school in Old Lyme. His works can be seen in many collections and museums, including the National Gallery of Art, Lotus Club, Corcoran Gallery, Metropolitan Museum of Art, and the Art Institute of Chicago. Carleton Wiggins died in 1932, in Old Lyme, Connecticut.
Similar Items from this seller