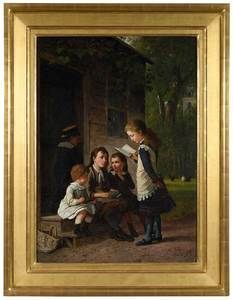 32" x 22" oil on canvas signed prominently lower right, Wm Hahn, NY, 1879 The frame is a custom gold leaf reproduction 40" x 31" Bio from ask art.com: Born in Ebersbach, Saxony, Germany on Jan. 7, 1829. At age 14 Hahn entered the Royal Academy of Art in Dresden where he studied for five years under Julius Huebner and continued for two more years at the Düsseldorf Academy. He received gold and silver medals from the Dresden Gallery. Some of his first watercolors were purchased by the King of Saxony and placed in the Nat'l Gallery in Düsseldorf. His paintings were exhibited in Boston, New York, and San Francisco including the California Art Union of 1865. In 1869 Èahn met artist Wm Keith in Düsseldorf and in 1871 came with him to Boston where the two artists shared a studio. In 1872 the two artists came to San Francisco and established a studio in the Mercantile Library Bldg. Hahn's sketching trips took him to the Sierra Nevada, Yosemite, Napa Valley, Russian River, and southern California. By 1876 he was a resident of the Bohemian Club and director of the San Francisco Art Ass'n. The year 1878 was spent in New York and, while there, he exhibited at the NAD and the Brooklyn Art Ass'n. Upon returning to San Francisco, he exhibited locally and received high praise from the press. Hahn married local artist Adelaide Rising in Piedmont, CA in 1882 and then left for an extended European honeymoon. They lived in London for several years and intended to return to California; however, he died unexpectedly in Dresden on June 8, 1887. Although he painted portraits and still lifes of fruit and flowers, it is his genre scenes which are his greatest legacy to California art. Exh: Calif. State Fair, 1873-95; San Francisco Art Association, 1873-80; Mechanics' Inst. (SF), 1874-96; Calif. Midwinter Fair, 1894; Alaska-Yukon Expo (Seattle), 1909; MM, 1939; Oakland Museum, 1976 (retrospective). In: CHS; LACMA; Oakland Museum; De Young Museum (Sacramento Railroad Station); Nat'l Gallery (Düsseldorf); Society of Calif. Pioneers; Crocker Museum (Sacramento); Hudson River Museum (Yonkers, NY); CPLH; Orange Co. (CA) Museum; Dresden Museum.
Similar Items from this seller