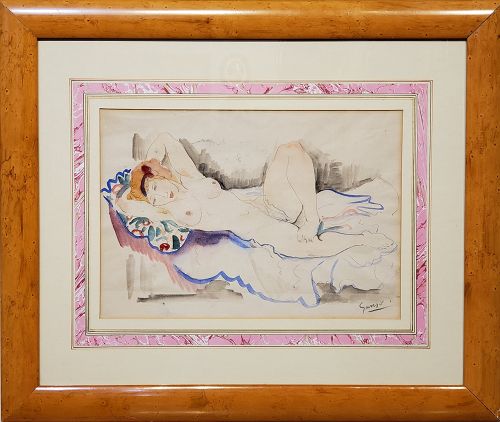 Guest Book
$1,200.00
A Female Nude Watercolor. 11.5" x 17.5" watercolor on paper, signed lower right by Emil Ganso, American 1895-1941, and it is in mat and frame. Net size approx. 11.5" x 17.5" frame can be changed. Provenance: Sotheby's NYC, 1992. Of Emil Ganzo, it was written that he, "a jovial sandy-haired young man walked into New York's Weyhe Gallery and said: "I am a baker. My name is Emil Ganso." With him he had a portfolio of drawings, which he explained he had done during his spare time. The pictures were not good enough to exhibit, but Weyhe was impressed enough to sign Ganzo to a long contract, gave him a small weekly allowance on which to live and continue to paint. Since then Ganso has proved that Weyhe made no mistake. In 1933 Ganso won a Guggenheim Fellowship and his paintings now hang in the Addison Gallery of Art in Boston, the Los Angeles, Whitney, Denver Museums, Metropolitan, Detroit, Cleveland and Worcester, Mass. Museums.
Similar Items from this seller