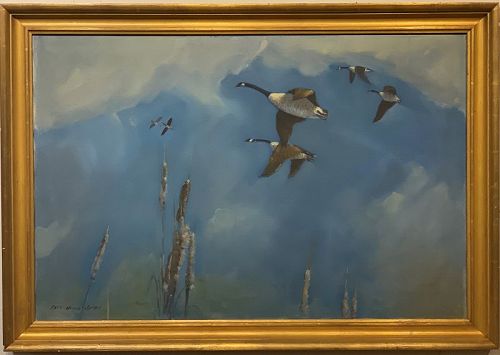 Guest Book
$650.00
24" x 36" oil on canvas signed lower left. Inscribed in artists's hand "Canada Geese" bio from askart: He is the grandson W. Harry Smith who was well known for his etchings of the Boston area including those purchased by Harvard University and M.I.T. and exhibited at The Museum of Fine Arts in Boston. He is also the nephew of the late Hugh Knight Smith and the late Paul Devon Smith, brothers whose oils and watercolors were exhibited in the Cape Ann area for many years. Mr. James' studio is in Sandwich, Massachusetts, where he currently resides with his wife Anne. Living on beautiful Cape Cod, and formerly on Cape Ann and Jackson, New Hampshire (Mount Washington Valley), it is easy to see where the inspiration for his work comes from.
Similar Items from this seller