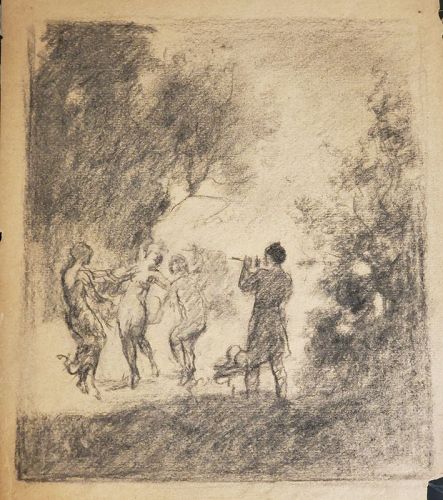 Guest Book
$80.00
11" x 8" approximate size. Allegorial sketch chracoal on paper Note edges with crimps on border of the work can be easily be cropped out with mat. From a private collection of works by this artist found in Detroit and I have sold many of these for good prices. This work is unsigned. Bio from Bio from Askart: Charles E. Waltensperger began sketching at a very young age, this continued as he worked as an elevator operator for the Detroit Free Press. There he kept a sketch tablet with him, drawing his passengers. One model, William E. Quinby, publisher of the Free Press was so impressed with the boy's skill that he paid Charles' tuition at the school of the Detroit Museum of Art and asked him to become an illustrator for the paper. Waltensperger began entering competitions at the Detroit Museum of Art School, until at the age of fourteen, he won the James E. Scripps Scholarship. This enabled him to spend two years studying in Paris at the Julien Academy with Benjamin Constant and Jean Paul Laurens. Charles returned to Detroit after his study to work as an illustrator and commercial artist, but his desire to paint took him back to Europe. Travelling to Europe more than ten times for a year or two at each visit, he settled into Laaren, Holland. Laaren had long been a well-kept secret among artists. Charles described its residents as "very poor, very generous, and reverently appreciate art." Here he was inspired by the Dutch masters and developed a love of genre scenes. The European art world welcomed Waltensperger, and encouraged him to stay with prizes and scholarships. Waltensperger tried to divide his time between Holland and Detroit, as he considered Detroit home. Here his work became "brighter", spending more time in Michigan and summers on the New England coast, as he absorbed American Impressionism. "Shaking off the dark Dutch colors and closed interior genre scenes, he began to depict open, sunny landscapes and harbor scenes, developing a more romantic style." His work is in the collections of the Rijksmuseum in Amsterdam, Louvre in Paris, and the Detroit Institute of Art.
Similar Items from this seller