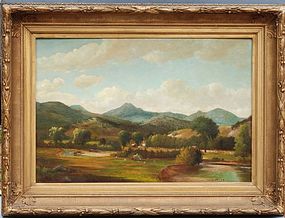 Guest Book
$7,000.00
Oil Painting Landscape View of Mount Chocurua, New Hampshire Signed By Samuel W. Griggs, an American artist who lived between 1827 and 1898. This New Hampshire Landscape measures 20" tall by 30" wide and in the original gilt frame it measures 29" tall by 38"wide. The view of Mount Chocurua, New Hampshire, is signed in the lower left corner by Samuel Griggs. Samuel W. Griggs, American (1827-1898) Griggs was listed as an architect in the Boston City directory from 1848 to 1852 and as an artist from 1854 until his death. At the time of his death he was living at 63 Studio Building in Boston. The competency of his work strongly suggests that he had professional training, and it is believed that he studied under Bierstadt before Bierstadt was well know. Griggs’s earliest datable painting of a White Mountain scene is 1858. That year he exhibited three paintings, one of which was a White Mountain view (View on the Pemigewasset River), in an exhibition coordinated by Albert Bierstadt and held in New Bedford, Massachusetts. Griggs painted in the White Mountains as early as 1858 and over the next two decades he painted views of the Pemigewasset and Swift Rivers, Artist’s and Willey Brooks; as well as Mounts Jefferson, Washington, Kearsarge, Lafayette, Moat; Lake Winnipesaukee, Silver Lake, and Squam; and the New Hampshire towns of North Conway, Sandwich, West Campton, Lancaster, Jefferson, and Thornton. He also exhibited at the Boston Athenaeum from 1855 to 1863 as well as regularly at the Boston Art Club from 1873-1898. Works by Griggs may be found in the Adirondack Museum, Blue Mountain Lake, New York; the McMullen Museum of Art, Boston College; Fruitlands Museum, Harvard, Massachusetts; Vassar College Art Museum, Poughkeepsie, New York, and the Butler Art Institute, Youngstown, Ohio.
Similar Items from this seller