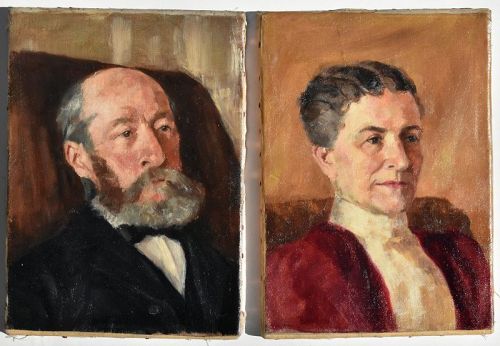 Pair of portraits, Priced as a PAIR... likely sketches for finished portrait he painted since these bear estate stamp. Nonetheless so painterly and shows an excellent hand associated with the artist. Priced unframed so you can choose how you want to display them. 10" x 14" and with estate stamp and titles on the back of the images. bio from askart.com: John Winthrop Andrews (1879-1964) John Winthrop Andrews was born on August 31, 1879 in Newtonville, Massachusetts. He studied at the Massachusetts School of Art with Frank Vincent DuMond, Edward Hamilton, and Joseph DeCamp. "DuMond was an influential teacher, counting among his students J. Winthrop Andrews and Gifford Beal. Along with Andrews, DuMond exhibited a painting called October in the first exhibit of the Yonkers Art Association (1916)." Source: The Hudson River Museum provided source material to Resource Library for the aforementioned article on Paintbox Leaves (2010 Exhibition at the Hudson River Museum): Autumnal Inspiration from Cole to Wyeth. J. Winthrop Andrews was best known as a painter of colorful landscapes and seascapes. The artist visited Bermuda from about 1910, the same year as his marriage to Alice G. Blaisdell. Andrews' Bermuda paintings include an oil entitled, Cottage Garden with Flowers, circa 1915. Andrews was a prominent art educator whose work was cited in numerous teaching periodicals of the time. Historical records list Andrews as the Supervisor of Drawing in Chicopee, Massachusetts and as the Director of Art for the Yonkers Public School system in New York. The artist was an active member of the Yonkers Art Association for many years. He served on the original Board of Directors of the association which was formed in 1916. In addition, Andrews was a member of the Yonkers Municipal Art Commission and the Eastern Art Association in New Haven, Connecticut. J. W. Andrews exhibited a painting entitled, Autumnal Ash, at the Yonkers Museum of Science and the Arts in 1934. This exhibition featured many distinguished artists such as Charles Gruppe and Walter Farndon. Source: The Herald Statesman, April 24, 1934. Published examples of paintings by the artist include: Nantucket (Massachusetts), Dunes at the Cape (Massachusetts), Whitehead (Monhegan, Maine), Grafton (Vermont), Bennington (Vermont), Oleander on a Sunlit Path (Bermuda), View of Buttermilk Falls (NY), Girl Picking Flowers, Hollyhocks, and Barnyard Chickens. A museum reference for the artist is the Butler Institute of American Art in Youngstown, Ohio. J. Winthrop Andrews died on June 18, 1964 in Huntington, New York. He was interred in Fairview Cemetery in Chicopee. The artist was survived by his daughter, Elizabeth Blaisdell Andrews. Sources: Who Was Who in American Art (1999) by Peter H. Falk Annual Report (Volume 24, 1917) - Published by the Western Drawing and Manual Training Association Magazine of Art (Volume 9, 1916) - Published by the American Federation of Arts The Rotarian (Volume 3, 1927) The Yonkers Art Association (1940) - Published by the Hudson River Museum The Harvard University Catalogue (1902) - Published by Harvard University: Theory of Design reports J. Winthrop Andrews as a student from Newtonville, MA. American Art Directory (Volume 9, 1911) - Published by the American Federation of Arts; R.R. Bowker Co. Bermuda's Foreign Artists of Yesteryear by K. A. Forbes - online article Industrial Arts and Vocational Education (Volumes 3-4, 1915), (Volume 7, 1918), (Volume 11, 1922) - Published by Industrial Arts Magazine Various early volumes of School Arts - Edited by William J. Edwards The School Review (Volume 26, No. 4), April 1918: Educational Writings by W. Sargent The online Central Archive Card Collection at the American Museum of Natural History Federal census records for 1930 Online genealogical records Notes: Per genealogical records, John Winthrop Andrews was the son of Charles J. and Elizabeth Andrews of Massachusetts. The artist's wife, Alice G. Blaisdell, was born in 1882. In 1948, she passed away and was interred in the Fairview Cemetery in Chicopee. The 1930 Federal Census reports the artist and his family residing at 655 Front Street in Chicopee. Per a New York Times article dated January 29, 1916: "The closing sale of the J. W. Andrews, Richard Canfield, and Brayton Ives, and other estates pictures under the auspices of the American Art Galleries at the Plaza last night brought $96,830. This made a grand total of $120,215 for the 177 paintings. The Andrews pictures, which predominated, an attractive group, were many of them small." Compiled and written by Tina Kasper.
Similar Items from this seller