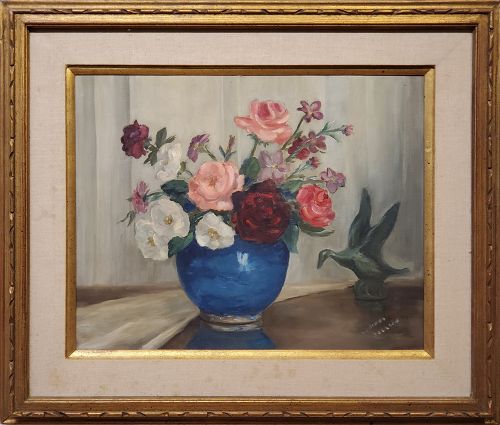 Guest Book
$450.00
Still Life Oil Painting By Corinne Jackson, an American artist, circa 1935. This still life of flowers and a bird on a table is Oil on canvas and measures 19.5" wide by 16" tall and bears an exhibition label from 1971. In the frame this still life painting measures 28" wide by 24" tall. Corinne Jackson lived and painted in Gloucester, Massachusetts. The following information is from Chris Jackson, the grandson of the artist: "Corinne Jackson was my grandmother. She lived with her husband, Frank, in Magnolia, Massachusetts and painted all over Cape Ann." "She died in Falmouth, Massachusetts, cared for by my Father and Mother, Earl and Marge Jackson in the late 1980's." "Late in her career she was struck by a car in downtown Gloucester, MA and shattered the bones in the arm she held a brush in. She never regained full use of that arm, but continued to work." "I remember the studio she maintained in the daylight basement of their home on Cove Ledge Lane. It was always cool in this concrete wall/floored area, but the light poured in from the East. The smell of turpentine was always prevalent." "I have two of her pictures; a surf and a still life of white peonies on a blue velvet background. No one liked this second painting, but it was always my favorite. I think if you look around my home today you will see the influence those colors had on my taste of decoration."
Similar Items from this seller