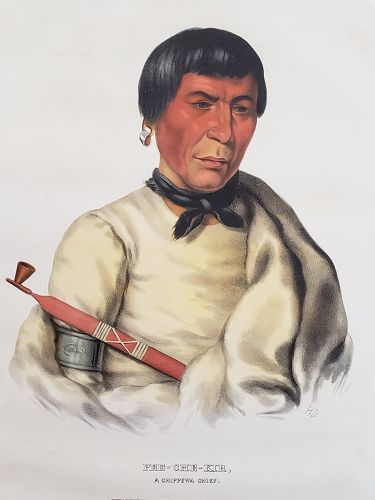 Guest Book
$750.00
"Buffalo" a Chippewa Chief Lithograph Portrait by McKenney & Hall. The McKenney & Hall lithographs of Native Americans. The McKenney & Hall prints of Native Americans, from their History of the Indian Tribes of North America (1837-1844), document an important part of American history, illustrating the great leaders of the Indian nations which have disappeared since the mid-nineteenth century. Thomas McKenney, head of the United States Bureau of Indian Affairs for many years, was a champion of the Indian and fought throughout his tenure to preserve something of their culture, so integral a part of the history of the United States. His legacy was a gallery of portraits of the great chiefs by artists such as James Otto Lewis, Charles Bird King and George Cooke. McKenney took office in 1816 and shortly thereafter began to plan an archive which would house Indian memorabilia. In the winter of 1821-22 a large delegation of Indians comprising Pawnee, Sauk, Fox, Menominee, Miami, Sioux, and Chippewa came to Washington to see President Monroe. McKenney took advantage of this opportune time to record their likenesses by commissioning Lewis and King. More paintings were added to these over the years resulting in an impressive gallery of Indian portraiture. In 1830, McKenney was dismissed by President Jackson and at this time began to plan for the publication of a portfolio of prints of these portraits. The results of years of struggle, McKenney’s folio was completed 6 years later, the plates for the first edition being first published in 1832. The folio was a collaborative effort, the text written by James Hall based on information which McKenney supplied. The magnitude of the project was overwhelming. McKenney battled poverty, politics, and printers to achieve his goal. Although he was acutely aware that he was preserving a chapter in history, he could not have known that had he not undertaken this project that no record at all would remain for in 1865 a fire at the Smithsonian destroyed almost all the original paintings from which the lithographs were drawn. Photography provided a record of the post-Civil War frontier but for the pre-Civil War period we have the artists and the visionaries, such as McKenney, who captured the brilliance of Indian culture in that brief period in history before much of it was forever lost. The prints were issued first in a folio size (images ca. 18 x 12 inches). The print were published by subscription, in fascicles, and then in volumes. 121 prints were made, which included 3 frontispiece prints and 118 portraits (one of the portraits was never published in the completed volumes). The work was magnificent, but expensive, so a smaller, octavo edition (images ca. 10 x 6) was issued. All the prints are hand-colored lithographs and the form one of the most important bodies of Native American images ever published.
Similar Items from this seller