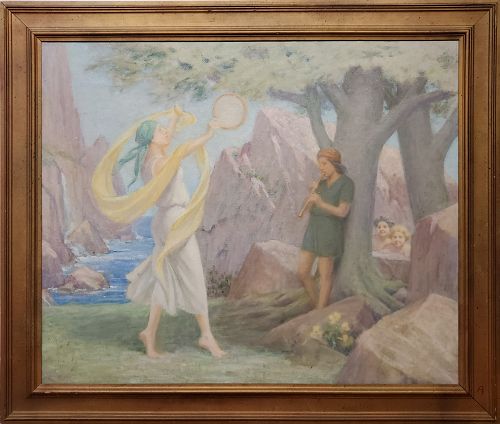 Guest Book
$3,600.00
This is an excellent Allegorical work in pleasant pastel colors by Charles E. Mills an American artist who lived between 1856 and 1956. The painting depicts two musicians dancing and playing under the trees near the ocean in a bright landscape. This painting is hand painted with oil on canvas and is signed verso measuring 30 inches tall by 36 inches wide. The art measures 36 inches tall by 42 inches wide in the frame that could be re gilt. Biography from Butler Institute of American Art From an unsigned biographical sketch of Charles Mills: Charles E. Mills was born in Pittsburgh, Pa., January 29, 1856 and died December 2, 1956 in Dedham, Mass. After one year in Allegheny College, he went to Europe in 1878. There he joined the Duveneck School and studied in Germany and Italy. He returned to the United States and set up a studio in Boston. He later spent a year in Paris and again maintained a studio in Boston. In 1888 with his sister and mother, he took up his residence at 63 School Street in Dedham and moved his studio to a block in Dedham Square. Mr. Mills was a portrait painter, muralist and landscape artist as well as a designer and worker in stained glass. His work can be found in the stained glass windows in Memorial Hall, Harvard College and in Trinity Church. His bibliographical murals of Benjamin Franklin in the Franklin Institute are well known. The following concerns Mills' life aside from his work as an artist : In 1920 I bought the duplex house in which Mr. Mills and his sister, Ellen, lived at 63 School Street. We moved into #61 - 5 children, mother-in-law, father and mother. The Mills had lived there since 1888, the year I was born. It was not long before we adopted the Mills and they adopted our family. They often said that they regarded our children as their own relatives. As the years went by and they became more feeble, my wife assumed the responsibiltiy for their welfare. Mr. Mills' eyesight failed, and he gave up his studio in 1946. He was able to get around but could not paint or read. He loved flowers and kept a flower garden until he was 98. His sister fell and fractured her hip in 1952, and was obliged to enter a nursing home. Mr. Mills had his meals with us until 1954 when he could no longer live alone. He entered the same nursing home as his sister and died December 2, 1956. His sister lived three years more and died in 1959, aged 101. Mr. Mills kept his mind until death. He went to sleep one night and never awakened. Mr. Mills was long a familiar and colorful figure in Dedham and was held in affectionate regard by all who recognized his Van Dyke beard and formal dress. The Mills are buried in Allegheny Cemetery, Pittsburgh. The cemetery was once part of the farm of his grandfather, who was was in business in Pittsburgh about 1804.
Similar Items from this seller