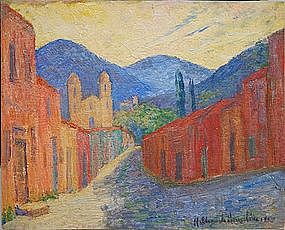 Oil on canvas laid down on board, 14.5" x 18" signed and dated. Biography from American Eagle Fine Art: By Debbie Hughes, granddaughter of Hildegarde Hume Hamilton, 2004. Public and Private Collections (a Partial listing) Eaton Gallery, New York City Hall of Art, New York City Virginia Military Institute, Lexington, Virginia Vice President Charles Gates Dawes The Allen Collection, Florida Sir Bede Clifford, Governor of the Bahamas Governor and Lady Grey, Nassau, Bahamas Sir Robert Neville, Governor ot the Bahamas Indian Students Club, Darwin's House, London American Church of Paris Societe des Beaux Arts, Paris Rudyard Kipling, English Novelist and poet, 1865-1936 The above names were culled from articles in newspapers, and they are but a few of the literally thousands of people worldwide that acquired her works over the years. There are still a good number of paintings in Fort Lauderdale in the house that she lived in there. I have acquired a number of them as well. Hildegarde was also listed in editions of: Who's Who in Art Who's Who in American Art Who's Who in the Southeast E. Benezit, Paris Enciclopedia Del Ante En America, Buenos Aires
Similar Items from this seller